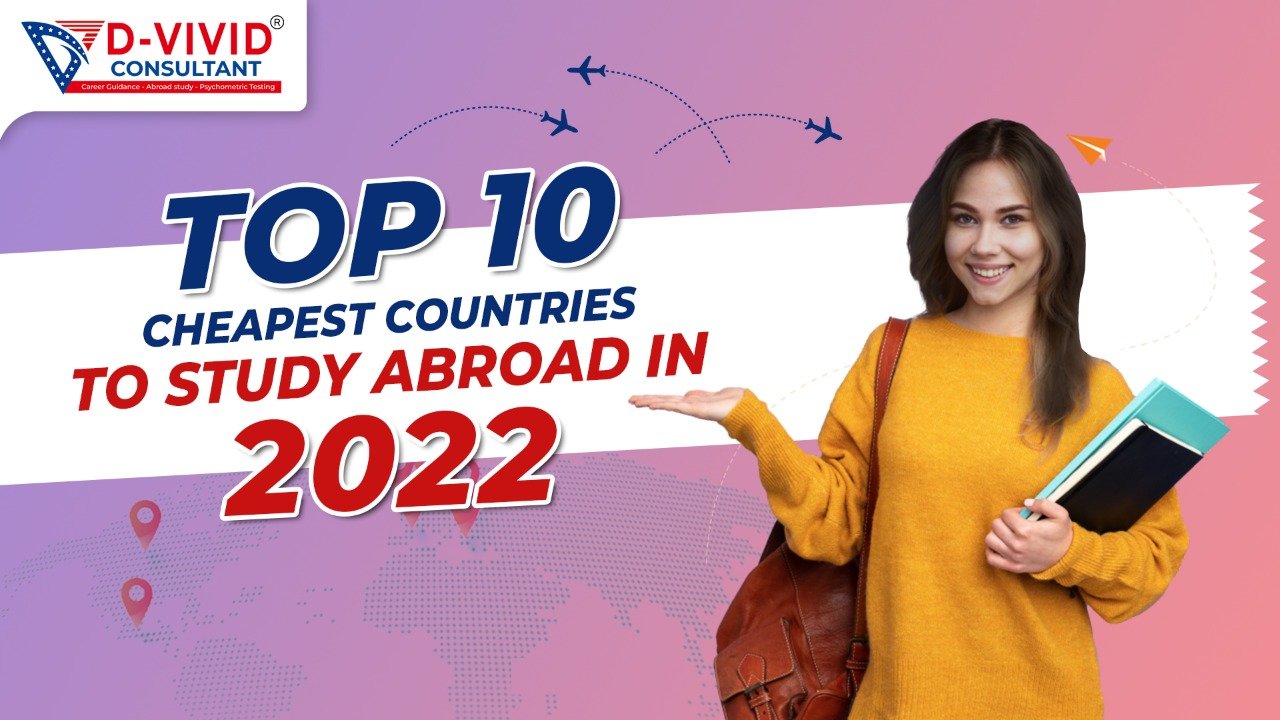 Do you want to go to university abroad but are worried about the costs? Let me now provide you with good news! Is it surprising that you can get a high-quality education for less money in many countries? Check out the site to learn about some of the cheapest best countries to study abroad, their approximate expenses, and the top universities.

Check it out top 10 cheapest countries to study abroad

German colleges and universities are among the most economical globally, making it the top study destination in the world’s cheapest countries to study. Public universities in Germany provide undergraduate and doctoral degree programs for free. Only a semester fee of about 250 euros is required of students. Public and private institutions charge master’s degree students an average of 20,000 and 30,000 euros for tuition fees, respectively, if they have not finished their bachelor’s degree in Germany. Furthermore, German students’ average monthly living expense is around 850 euros.

Norway, a country renowned for its scenic beauty, is also a popular choice for higher study. In exchange for a semester fee of $35 to $71, public universities give free education to all students, domestic and international. However, the cost of living in Norway while studying there is on the upper end of the spectrum. A student’s annual living expenses will be roughly $17200. However, there are several scholarships available.

Mexico is a popular and affordable study abroad destination because of its rich Mayan culture. This country’s cultural heritage includes 35 UNESCO World Heritage Sites, and it also provides excellent higher education options for overseas students. Depending on the subject, university, and degree of study, tuition fees in Mexico can vary substantially. Undergraduate degrees cost $378 to $818 per year at public institutions, while they cost, on average, $1636 to $16353 a year at private universities. Living in Mexico is far lower; a student can get by on $400 to $500 a month in total expenses.

A rising number of overseas students choose Taiwan as a place to study because of the government’s initiatives to offer more English-taught degrees. The cost of education in Taiwan varies widely depending on the kind, of course, university, and field of study. A semester’s tuition can range from $1650 to $4700, depending on the course and the degree of study. There are also several governments and university-funded scholarships available to help offset the costs of attending university for overseas students. The cost of living in Taiwan may rise to $ 3700 each semester.

Studying in Poland is becoming increasingly popular as a low-cost option for European students due to the country’s rich cultural legacy, excellent educational system, and low cost of living. International students must pay tuition fees, even though Poland provides free higher education to its inhabitants. International students may be charged anything from $2230 to $4180 a year at public colleges, while private universities might charge $6600. It costs a student in Poland roughly $650 a month to pay all of their expenses, significantly less than in other European nations.

Studying in Malaysia, one of the most affordable countries to study abroad, is becoming increasingly popular among international students. Branch campuses of some of the world’s most renowned institutions allow students to pursue the same degree at a considerably lower cost than if they were to attend the university’s leading site. Malaysian institutions charge an average of $3950 per year in tuition fees. Students should anticipate paying between $3440 and $4600 per month, including housing, food, and transportation, for their living expenses.

Denmark citizens are considered to be among the happiest people in the world and the world’s most educated and environmentally conscious. It is well-known for having one of the world’s best educational systems, thanks to its modern and bustling cities and magnificent environs. Students in Denmark can expect academic excellence and high quality of life focused on environmental preservation while they are there. As a small nation, Denmark has the highest number of Nobel Laureates per population globally, and this is a statistic that few people are aware of.

Spain is not simply a fascinating tourism destination but one of Europe’s top study sites. By choosing Spain for higher education, you will have the ability to receive a world-class education while also being wowed by the beautiful cities of Spain. Obtaining a degree from the nation could give you the essential exposure to assist you in attaining your work ambitions. A public university charges a tuition cost of €680-1,300 (INR 56,800 to INR 1,09,000) each year for bachelor’s level programs. On the other hand, for masters-level courses, the tuition fee for both public and private universities is almost equivalent which is usually between €720 (INR 60,000) to €1,440 (INR 1,20,000) for a 60 ECTS credit course and between €3,900 (INR 3,35,000) to €7,800 (INR 6,50,000) for a 120 ECTS credit course.

The country of Belgium is one of Europe’s most multicultural and beautiful. Education is excellent, expenses are low, and students can study at some of Europe’s most prestigious universities and enjoy the vibrant local culture of Brussels. EU students spend an average of €906 (INR 79,074) a year on tuition, while non-EU students pay an average of €4,175 (INR 3,64,388) per year. All educational levels are included in these statistics.

Almost every French institution gives world-class education to students from all over the world, no matter where you go in France. You can also choose between full-time or part-time lessons. France excels in many fields, and students may earn a degree regardless of their career choice. Other popular educational fields include nuclear, space & aviation, economics & law. Non-EU/EEA students starting undergraduate programs in France will pay an average of €2,770 (INR 2,41,762) and €3,770 (INR 3,29,040) each year. PhDs cost €380 (INR 33,165) on average for all students.

I hope this list of the Top 10 cheapest countries to study Abroad in 2022 to best study abroad visa consultan was helpful. Do you want to study in one of these countries in the future? Browse the study abroad ranking system, which can help you choose the right course and university for your requirements.